As the concept of ‘performance’ crosses over between the mechanistic and the creative, between serving ‘time and motion’ studies and their suspension in ‘duration’, between the ‘frictionless’ and its interruption, such distinctions themselves seem to delineate fields of research. But it is precisely these distinctions that prove to be in question when invoking the concept of ‘animism’. Although defined historically in terms of these familiar oppositions, what has come to be called the ‘new animism’ concerns what cannot be accommodated by them—inviting a sense of the ‘re-enchantment’ of the world, even as a self-styled modernity appears intent on destroying it. Not the least of what performance research explores in the name of animism, then, are ‘alternatives’ to modes of globalized practice, affirming a pluralism of understanding relations in and to the world, which are not limited to those of human ‘actors’. Participating in the work of cosmopolitics, animism implies fundamental questions about the very ‘life’ of social relations—many varied examples of which are addressed in the essays of this issue of Performance Research.

‘This Artwork Is Having a Rest’

Complicating the Implication : Animism and spectrality in performances without humans

There As Here : Living ecologies of film in Le Quattro Volte

Dirt in the Lens : On matter and memory in photographic performance

The Miniature Object and the Living World

When I Grow Up I Want to Be an Indian

Entangled Animisms : Whakaaro and dialogue in the artwork of Shannon Te Ao

Burning the Bull : The changing meanings of a harvest ritual in the Anthropocene

I Want It to Go to a Good Home : Animism in Western relationships with personal possessions

Becoming Doll : Radical objectification in the performance of Freddie Mercado

The Animation of Contemporary Subjectivity in Tino Sehgal’s Ann Lee 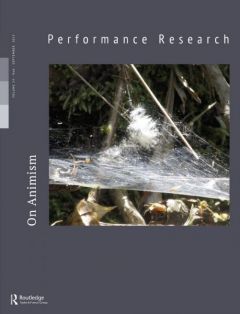 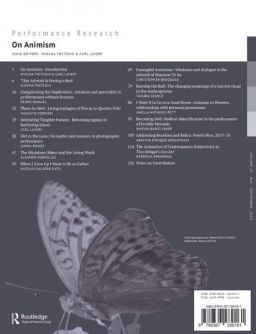